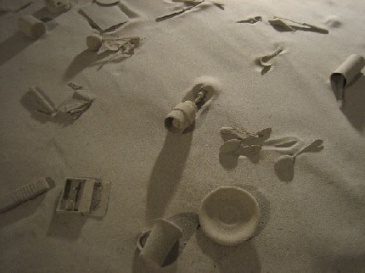 Identical colours and similar material of objects and surfaces adds to the effect of the homogeneous picture. The attraction is increased by the recognition value of the installed objects. The viewer loses himself in corresponding the objects to their former origin and may be he associates a day at the beach. A situation lots of people know, where objects are forgotten or washed up.
Confrontated with the title "climatic change" the first impression is taken ad absurdum. What has happened? As seen by the archeological excavation in Pompeji we take a look at a snap-shot. Perhaps someone opened a door and discovered the objects. Our highly cultured civilization, covered with a layer of sand. Has there been a sandstorm, a flood? The cause is insignificant as the remaining objects are now useless The twinkling of an eye, the freak of nature suffices. The same situation has effected Bangladesh, where flash flooding happens very often. If climatic change continues, many more countries and islands will suffer.